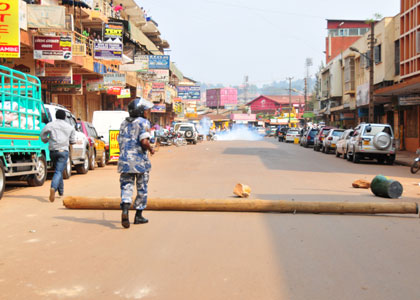 Kisekka Market has been closed indefinitely and taken over by military police.

The decision follows a meeting between the police and market leadership.

According to the market chairman Robert Kisembo, they have agreed to close the market to ensure security and restore order.

Meanwhile a commercial cyclist identified as Ahmed Kizito has been knocked dead by a speeding bus along Kyaggwe Road.

Relatedly, two people are in critical condition at Mulago Hospital after they were allegedly injured in the scuffle at Kisekka market this morning.

Steven Muphini a Kenyan National and another unidentified man are currently undergoing treatment at Mulago hospital.

The police deputy spokesperson Patrick Onyango however does not confirm the reports saying they are still compiling a formal report on the injuries that resulted from the protests.

Meanwhile Onyango says the former FDC leader Kiiza Besigye who is being held at the Central Police Station is to be charged with involvement in an unlawful assembly.