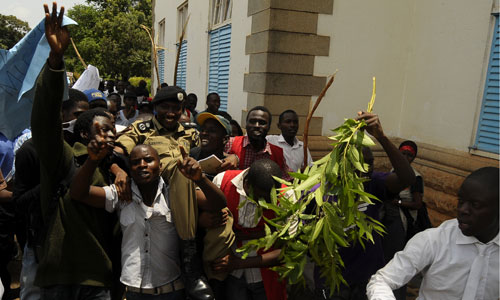 The police have fired more teargas this afternoon as it battles with the protesting students at Makerere University.

The students are protesting over the 100, 000shillings internship fees paid every semester.

The Administration block has been evacuated and closed, as the students turned rowdy, pelting stones at the police.

The university Vice Chancellor Prof. Vanancious Barya attempted to address the students but they were too rowdy.

Barya told the students that the fees finance their internship activities which would have to be scrapped entirely, if they didn’t want to pay.

The university’s academic registrar Alfred Masikye however says today’s demonstration is suspicious and could be politically motivated.

Masikye says the timing creates suspicion since the fees are not being paid now, saying the students could have been used by some forces to create chaos.