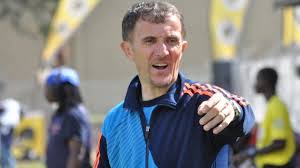 Cranes coach Mulitin ‘Micho’ Sredojevic has confirmed that reliable left back Godfrey Walusimbi won’t be available for the weekend fixture against Liberia.

Walusimbi is said to have fallen out with Congolese side Don Bosco, a club he joined in January.

He has not played football since March against Liberia.

Alex Kakuba and Joseph Ochaya are the other left backs in line to replace Walusimbi come Saturday.

The other who is will be missing in action is number one custodian Denis Onyango who is suspended for this fixture after accumulating two yellow cards.