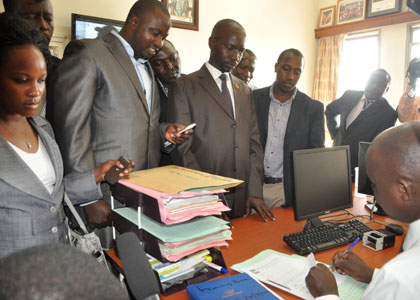 Members of Parliament pushing for the recall of the house  from recess have finally handed in their petition to the office of the speaker in her absence.

The petition was handed over to the Principal Private Secretary to the Speaker of Parliament Patrick Ngolobe.

Those who handed over the petition include MPs Hamson Obua, Mariam Nalubega, Andrew Baryayanga, and Theodore Sekikubo, among others.

They managed to get 126 signatures. The constitutional requirement is 125 to recall the house.

The MPs want Parliament to recall the house from its recess over what they call a threat to the independence of the legislature by the executive.

This follows a clash between Parliament and the Executive over investigations into the death of former Butalejja Woman MP Cerinah Nebanda.

HOTSEAT: Effect of $10 tax on people flying out of Uganda