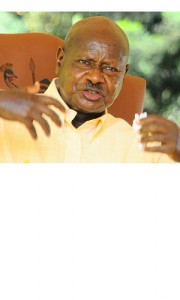 President Yoweri Museveni is today expected to address parliament on matters of oil and gas.

This comes days after government signed fresh agreements with Tullow oil even after parliament halted the process.

Government has however ever since defended the move saying these were not new contracts but were only completing the ones which were already in the process.

While Ruling NRM Mps have welcomed the address opposition legislators have expressed pessimism about the address noting that they do not expect much.

The president is expected at 2 pm.

Members of civil society however say President Yoweri Museveni’s address to parliament is insignificant after disrespecting its resolutions.

President Museveni admits to have given the directive to have the oil agreements signed following an agreed common position from NRM mps.

The Chief Executive officer of Africa Institute for Energy Governance Dickens Kamugisha says, the president doesn’t deserve audience after disregarding parliament’s resolutions at a time when allegations of corruption in the oil sector are being investigated.