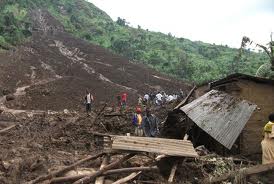 As the rains season intensify, authorities in landslide prone areas are worried about the likely re-occurrence of mudslides.

He says they have advised residents living in high altitude areas to vacate before it is too late.

He however says the district has not yet identified land for resettling the affected residents.

On March 1st 2010, close to a hundred people were killed while thousands were displaced by mudslides that hit the eastern district of Bududa.