Richard Sewakiryanga and other members of the civil society

According to Mbabazi, the bill was not only sneaked into the House but also required wider consultations because homosexuality is not a new phenomenon in Uganda.

Mbabazi who opposed the passing of the bill citing lack of quorum believes that homosexuality is an abnormal situation that requires a gradual rather than a radical approach;

Meanwhile, Uganda’s ambassador to Canada Alintuma Nsambu says sections of the population there have started mobilizing against Ugandans.

In a separate development, human rights activists have thrown their weight behind President Yoweri Museveni’s resolve to study the Anti-Homosexuality bill before assenting to it. 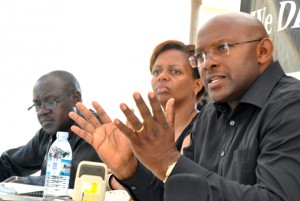 In December, Parliament passed the bill, which seeks to outlaw acts of homosexuality and prescribes life imprisonment for persons caught in the acts.