Uhuru Kenyatta has been sworn in for a second term as president of Kenya at a ceremony in the capital, Nairobi, boycotted by the opposition.

The ceremony took place in a packed stadium with police driving back other Kenyatta supporters trying to get in without seats. 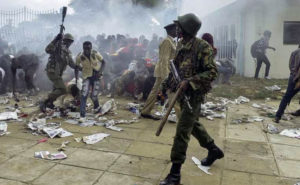 Riot police were also deployed in another part of the city to stop a rally by opposition supporters.

He boycotted the re-run of the presidential poll last month and says Mr Kenyatta was not elected legitimately.

Mr Kenyatta was officially re-elected with 98% of the vote on 26 October but just under 39% of voters turned out.

The original election on 8 August was held over again after being annulled by the Supreme Court on grounds of irregularities.

Kenyatta promises to be a president for all