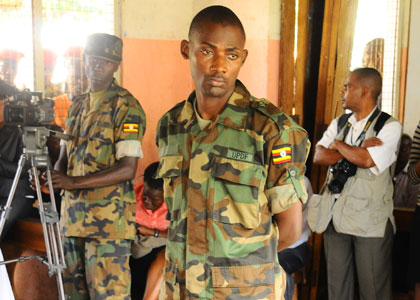 This is after he was convicted on charges of man slaughter and attempted murder.

He has been sentenced to 30 years for each of the 3 counts of manslaughter and 5 years for attempted murder.

He will however spend 35 years in jail since the sentences will run concurrently starting today.

Delivering the sentence, the Chairman of the divisional court martial Col Geoffrey Kakama said that the UPDF as an institution is mandated to protect not to kill citizens.

Rwakihembo has also been stripped of his rank and dismissed from the army with disgrace.

He however said that Lance Coporal Rwakihembo can appeal against the sentence within 14 days.

Outside the court room however, the residents have reacted with shock and anger at the sentence saying the accused deserved a much lighter punishment since it had been proved that he had no intention to kill.

Rwakihembo is said to have shot dead three people and injuring another.

Rwakihembo is said to have committed the offences on December 10th 2012 in Luzira Kisenyi zone 3 a Kampala suburb.

The dead included his wife Irene Nakibirango with whom he had disagreements over money.