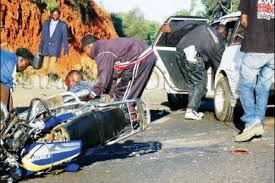 Five people including a child have died in accident that occurred this evening at Seeta a Kampala suburb.

The accident involved a trailer truck registration number UAP 512A whose driver is said to have lost control and knocked two commercial cyclists who were carrying passengers.

The bodies of the deceased have been taken to Mulago Hospital.

Two of them have been identified as Erick Ssali one Dan, both boda boda cyclists.

Senkumbi is appealing to members of the public with missing persons especially females to check with Mulago Hospital Mortuary.