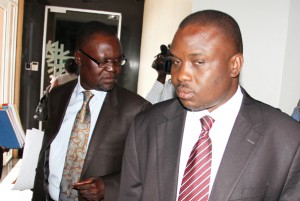 The Attorney General has asked the presiding judge to disqualify himself from Erias Lukwago’s case.

The Attorney General represented by Martin Mwangushya has asked High Court judge Yasin Nyanzi to step aside because he is likely to be biased.

Mwangusha argues that Nyanzi gave the interim order reinstating Erias Lukwago as lord mayor following his impeachment. The case has been adjourned to January 24th.

The embattled lord mayor is challenging his removal from office.

Lukwago through his lawyers wants a report that the tribunal set up quashed and declared as a nullity.

He says it is based on irrationality, biased and against the principals of natural justice.

Earlier, a group of Lukwago’s supporters pounced on a man they suspected to be a spy.

The unidentified man was only saved by court police who whisked him away to safety.