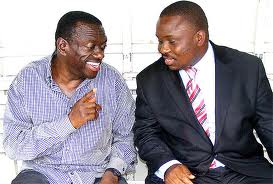 Former FDC leader Kiiza Besigye and city lord mayor Erias Lukwago have been rearrested, less than an hour after they were granted bail by Buganda Road Court.

They are said to have been driven off in a police vehicle to Besigye’s home in Kasangati along Kayaza road.

The police however remain tight-lipped on the reason for their latest interception.

The duo appeared this afternoon before Buganda Road Court Grade One Magistrate Julius Borore and denied the charges of being part of an unlawfull society.

Prosecution alleges that the duo and others still at large on the 19th of July while at Katonga road in Kampala held themselves out as members of the For God and My Country formerly the Activists for Change, and outlawed pressure group.

They were arrested separately on Tuesday and taken to Jinja Road and Kiira Road police stations respectively.

They were represented by Abdu Katuntu and Medard Sseggona.

Earlier Lukwago spoke to KFM shortly after the duo was granted bail saying these arrests would not derail them from the cause.

Meanwhile, the Lawyers representing former FDC’s president Dr.Kiiza Besigye and city lord mayor Erias Lukwago say they will not bow to any oppression by any one or the state.

One of them, Medard Lubega Ssegona says the charges leveled against their clients cannot stand.

He adds that this will not deter them from pushing for their rights.