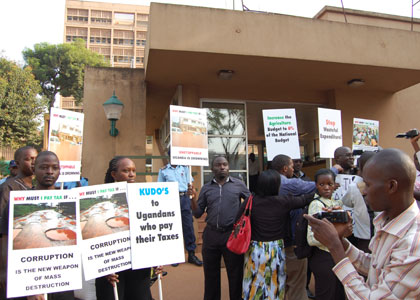 The four including Andrew Karamagi, Leonard Okello, Micheal Kabooneka and Emmanuel Muwanika were arrested this morning as they protested outside the Ministry of Finance offices over the heavy burden laden on tax payers due to corruption.

Earlier, the activists, clad in black T-shirts, carried sacks of sand loaded on wheel barrows meant to demonstrate the heavy burden laden on tax payers due to corruption.

They say they want government to first ensure that all stolen public funds are recovered before new taxes are levied on.

Their protests were however shortlived as Police, led by Kampala District Commander, James Ruhweza, dispersed the demonstrators.

One of the arrested, Leonard Okello tells KFM that they have been released and asked to appear at CPS next week.