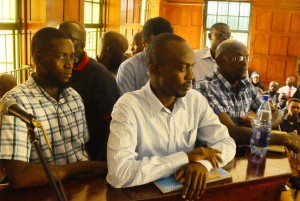 The hearing of a constitutional petition by 11th July bomb suspects challenging their prosecution in Uganda has kicked off.

They appeared before five justices of the Constitutional Court led by Justice Steven Kavuma who adjourned the case until tomorrow for further hearing.

The suspects through their lawyers led by Peter Walubiri are also challenging their arrest from Kenya and Tanzania saying it tantamounts to kidnap.

The 12 suspects are also challenging their trial before International War Crimes Division of the High Court.

They include 7 Kenyans, 4 Ugandans and 1 Tanzanian