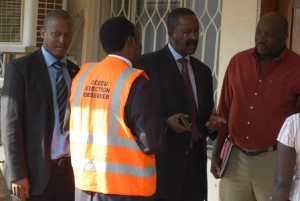 Kangwagye beat his closest challenger Nathan Byanyima with 18,204 votes against 16,946.

According to the returning Officer Richard Twikirize, spoilt votes were 70, while invalid ones were 1,159.

Speaking to KFM this morning, the project coordinator Citizen’s Coalition for Electoral Democracy in Uganda Chrispy Kaheru blamed the high number of invalid votes on the absence of a law to guide the process of candidate withdrawal.

The Bukanga parliamentary bi election which attracted five candidates was called following the death of Gregory Matovu in September.

The other candidates were in the race are Democratic Party’s Shafique Dembe, Ham Tumusiime-Independent and Forum for Democratic Change’s Tito Turiyo.