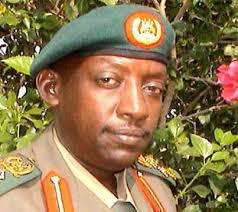 The late Kankiriho has been described as a nationalist and Pan Africanist.

The Chief of Defence Forces Gen. Aronda Nyakairima has hailed the fallen Brigadier Patrick Kankiriho for selflessly serving the nation.

Addressing mourners at All Saint’s Cathedral Nakasero, Gen. Nyakairima said the late led all counter insurgency operations in the country and through his contribution; government was able to succeed in the Karamoja disarmament exercise.

Speaking at the same service the chief mourner Defence Minister Crispus Kiyonga asked officers in the army to emulate the late Kankiriho’s works.

He died on Monday and will be laid to rest in Rushere Kiruhura district tomorrow.