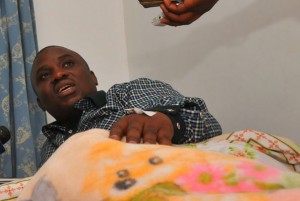 Commercial cyclists commonly known as bodaboda who operate from Kampala have today paid a courtesy visit to the lord mayor at his home in Wakaliga.

The cyclists also fundraised for the Lord Mayor to keep him going for the time he will be out of office.

Speaking to them, Erias Lukwago said that his only mistake at the authority has been standing with the poor. He however says he will continue to fight for the less privileged in the city even if he is thrown out.