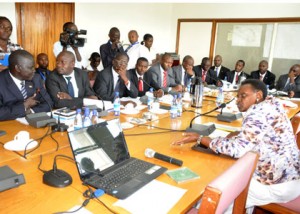 The minister for Karamoja Affairs and First Lady Janet Museveni continues to be queried by the Public Accounts committee of parliament regarding her role in the OPM scam.

She has defended the Program on cattle branding, saying it was successful and that it should continue.

She however says she is not in position to tell whether or not there was value for money since she does not handle money.

Earlier she denied using Karamoja money to finance her travel.

Mrs Museveni has explained that though her trips to Karamoja involve a huge entourage they do not affect the budget for Karamoja in any way since they are funded by the ministry for the presidency.

She has also denied claims by Karamoja RDCs that she does not consult or involve local leaders in the implementation of the various projects.

She has presented to the MPs letters that were reportedly written to the local leaders about the said projects.

Kataha Museveni is one of the senior government officials being questioned over their role in the alleged financial scam at office of the prime minster.

This comes just a day after the Prime Minister Amama Mbabazi was questioned by the same committee over his role in the alleged scam and he denied political responsibility.

The committee is investigating the suspected theft of Shs.50 billion in foreign aid meant for post-conflict recovery in northern Uganda and Karamoja.