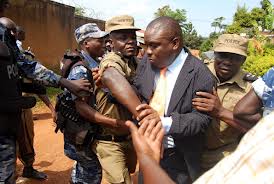 He has been denied access to the ongoing Kampala Capital City Festival.

Lukwago had gone to the venue of the festival on Kampala Road only to be blocked by the police who said that he had not been invited.

Lukwago has told KFM that he has instead been advised to attend the Buganda communal cleaning exercise in Kyagwe in Buikwe district.

The City Carnival is running under the theme; ‘Our City, Our Celebration’.

The annual fete  has showcased more than 200 activities in different fields such as business, fashion, art and culture, entertainment, technology and industry, which engage the whole family and general public.

Having been upgraded to the Kampala City festival, from carnival, the event is even bigger this year.

From a themed procession to an exhilarating concert by Ugandan musicians, the festival programme also consists of photographic and art exhibitions, tours and trails and street performances.