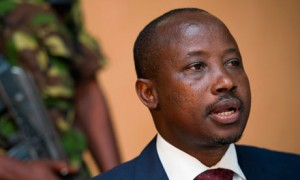 The M23 rebels have revolved to impeach their president Jean Marie Runiga.

This has been confirmed by the spokesperson Bertrand Basima who says Runiga has been relieved of his duties as Chairman of the M23 with immediate effect.

He says the Vice-President of the Movement assumes on an interim basis, the functions of President until the appointment by Congress of a new President.

The M23 Military High Command accuses Runiga of failure to drive the group’s vision and to implement its political program.

Runiga is also accused of diverting finances of the Movement to support obscure and prohibited activities such as the recruitment of political and military leaders on behalf of General Bosco Ntaganda thus enabling the General to sow unrest and divisions.

It will also ensure a peaceful and sustainable resolution to the conflict in the Democratic Republic of Congo.

He however says that the Kampala talks will not be affected in anyway.