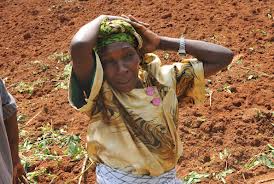 Gregory Natuweera beheaded Esther Abimana and after cut open her stomach before fleeing the village.

Eyewitnesses say that Natuweera had fights with his wife after she stopped him from selling off part of their land.

The body of the deceased was found lying in a pool of blood.

Police in Mubende has already taken the body to the hospital for postmortem as the hunt for the suspect goes on.