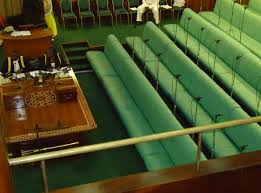 Members of the opposition have walked out of the House.

The walk-out was prompted by the Deputy Speaker’s decision to throw Kyadondo East MP Ibrahim Semujju Nganda out of the House forcefully.

Earlier, the Deputy Speaker Jacob Oulanya had suspended the house temporarily after Semujju refused to comply with his orders to leave the house.

Oulanya said the MPs’ suspension period has not expired and demanded an apology.

Semujju is one of the four MPs who were earlier suspended for three sittings over alleged indiscipline during debate on the Public Order Management Bill.

This has however not gone down well with the opposition.

Lubaga South MP John Ken Lukyamuzi who is also acting leader of opposition, has condemned the action saying it is a breach of the rules of procedure.