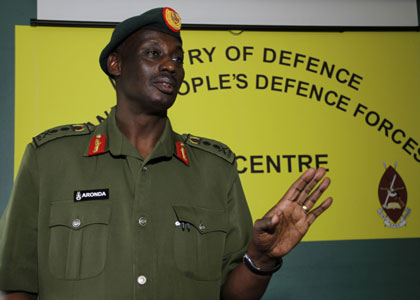 General Aronda Nyakairima will have to wait a little longer before he can be vetted by Parliament.

The general who was recently appointed Minister for Internal Affairs was meant to face the vetting committee this morning but this did not happen.

He arrived at Parliament just in time to face the panel but without giving reasons, the speaker of Parliament Rebecca Kadaga postponed the vetting to a yet to be named date.

Kaweesa adds that a new date will be set, when Aronda and State Minister in charge of Primary health Care, Dr. Elioda Tumwesigye will be vetted.

Aronda’s resignation from the army remains one of the contentious issues that some MPs have raised before.

Gen Nyakairima was recently appointed the new minister for internal affairs by president Museveni, moving from the army where he was the Chief of Defense forces.