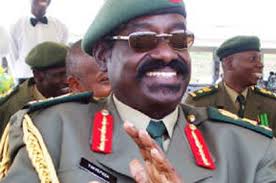 Lawyers representing General Sejusa have withdrawn from the proceedings of the parliamentary committee.

The committee on Rules Privileges and Discipline is investigating Gen. David Sejjusa’s conduct in parliament.

The withdrawal was contained in the letter written by the head of the legal team Ladislaus Rwakafuzi presented to the committee by one of the lawyers Fred Mukasa Mbidde.

According Mbidde, Sejjusa will not appear before the committee on allegations that the process is flawed.

Meanwhile the lawyers failed to produce evidence before the committee that they were instructed to represent him.

Fox Odoi who chairs the committee says that there is no way they can continue dealing with the lawyers who have no notice of instruction from Sejjusa.

Consequently, fresh summons are to be issued to General David Sejusa.

The Committee chairperson Fox Odoi says they have found it necessary to give the general a second chance after they failed to agree with his lawyers.

He said that this time they will explore all avenues including the ministry of foreign affairs to ensure that the general personally receives the summons.

Odoi also notes that the fresh summons means that the committee will not report to parliament on 10th October as earlier instructed by the speaker.

Relatedly, proposals to have Gen David Sejjusa’s matter referred to the army for action are cropping up.

The chairman of the awards committee Elly Tumwine says Sejusa represents the army in parliament and therefore should be handled by the same institution.

He says the process to investigate Sejjusa’s behavior is a waste of time.

Meanwhile, the Deputy Army commander, Gen Charles Angina on the contrary insists that the matter be handled by parliament since Sejjusa is an MP.

He has however appealed to the committee to hasten the process so that they can have him replaced to complete the army team in parliament.