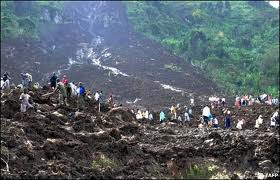 The residents of Kabukero village in Mahango sub-county in Kasese district are living in fear for their lives after a mudslide killed three children last evening.

The three girls all from one family have been identified as Anita Masika, 5, Asnet Biira, 3, and one year old Asrinin Kabugho.

Flora Mbambu an eyewitness who was home with the children at the time of the tragedy says the children were sleeping in one of the rooms when the walls caved in.

Their parents were out in the market at the time.

It took efforts by about 100 residents to dig through the rubble to retrieve the bodies about 2 hours later.

Mahango LC 3 chairman Stepen Muthekengwa has asked the ministry of disaster preparedness to declare the Kasese a disaster area and plan for the relocation of the people in high risk villages.

The current deaths bring the number of children to have so far died in Mahango sub-county to 12.

In May 2012 three children perished in Butalimuli village, while another girl was killed in Kabukero village.