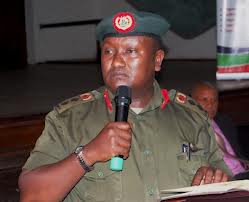 The army has dismissed as baseless claims that it is among the top three human rights abusers.

These were reported during the LRA war.

The report says the UPDF officers reportedly raped male and female abductees to punish and intimidate populations resisting their orders.

The report has again ranked the police highest on the list of human rights abusers.

According the commission chairperson, Meddy Kaggwa, there was a general reduction in the number of complaints against government institutions.

Following in second place are complaints against individuals at 190 cases, while the UPDF comes third with 85.

177 and 66 complaints of torture were recorded against the police and UPDF respectively.

While 209 and 12 were cases of detention beyond the stipulated 48 hours against the police and UPDF respectively.

The commission also noted an increase in cases of violation against the Internal Security Organ from 0 in 2011 to 7 in 2012.

By Ivan Ssenabulya President Yoweri Museveni, who is also the Commander in Chief of UPDF has appointed Lt Gen Wilson Mbadi the new Chief of Defence...

President Museveni has declared tomorrow, Friday a public holiday and 4th National Prayer Session for inter-denominational prayers against Coronavirus infections. It comes at a time the country...

Former Security minister Gen Elly Tumwine says he will advise President Museveni to prepare a smooth transition of power. While handing over the security office to Maj...

BY DAMALI MUKHAYE The National Covid-19 Task Force chaired by the Prime Minister, Robinah Nabbanja has approved seven groups of people to benefit from the covid-19...

Everest Kayondo, the Chairperson, Kampala City Traders Association has died. According to the association’s spokesperson Issa Ssekito, Kayondo has succumbed to Covid-19 from Life-line hospital in...

27 students held over death of a gate man