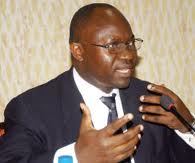 The Police is hunting for thugs that broke into the offices of the Foundation for Human Rights Initiative.

According to the foundation’s executive director, Livingstone Ssewanyana, the thugs made off with hard cash and property including mobile phones and Laptops among other things.

Sewanyana says some offices were swept clean with doors even plucked out.

The thugs allegedly drugged the security guard before ransacking the whole building.

He says the police have taken control of the premises and investigations kicked off.