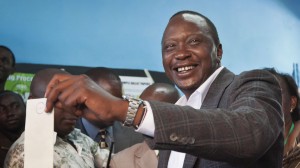 The oath was administered by Judiciary Chief Registrar Gladys Shollei and witnessed by Chief Justice Willy Mutunga at 1.00pm.

The colorful ceremony attended by at least 11 Heads of States is under way at the country’s biggest sports facility, Moi International Sport Centre Kasarani.

The swearing in ceremony that has been organised by the Assumption of the office of the President Committee  is constitutionally required to take place no earlier than 10am and no later than 2:00pm.

Accompanied by his wife Margaret, the new president used the Bible that was used by his father in 1963.

Uhuru was then presented with a duly signed certificate of inauguration, which he waved amid roaring cheers from jubilant crowds gathered at the Moi International Sports Centre- Kasarani.

He was then handed with instruments of power – a sword and a copy of the Constitution by the out-going President Kibaki.

The sword represents his take over as the Commander in Chief of the Armed Forces of the Republic of Kenya.

The ceremony was spiced with military full regalia parade and new presidential standard navy blue flag and a 21-gun salute.

President Yoweri Museveni has delivered a key note address on behalf of all the invited heads of state.

He has congratulated Kenyans upon holding a peaceful election and the Kenyan media for exhibiting a high degree of independence and professionalism.

He has also saluted the Kenyan voters voters for rejecting what he described as the “black mail ” of the International Criminal Court.